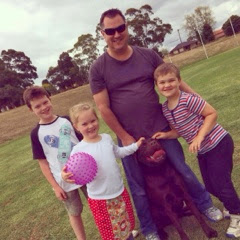 Oscar, Isaac, Matilda - the only photo I had of you all last week after we took Milo for a run around the park!  Don't tell Darren he's made a cameo on here - he doesn't 'do' social media! 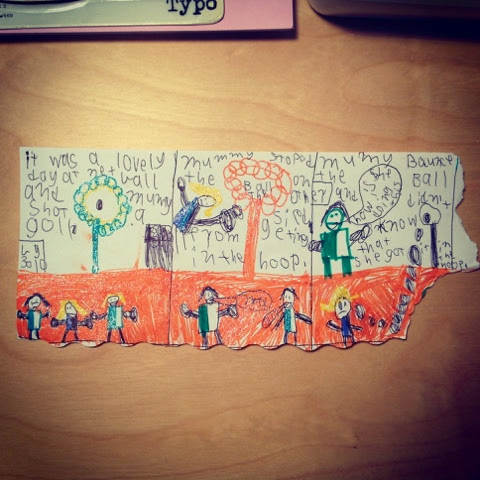 I couldn't not pop this amazing cartoon Isaac made for me up! I'm the character with the golden hair doing all the fancy moves.  My favourite bit... the opposition player in green in the last scene with the speech bubble incredulously wondering, "How is she doing this".

Posted by LionessLady at 8:02 AM No comments:

I've been addicted to the UK magazine Simply Crochet since it first came out.  I have a lovely newsagent who pops one aside for me every month and I get a dreadful womanly rush when I discover that both Simply Crochet and Mollie Makes have landed at the same time giving me reason to ignore everything else around my while I flick through both!
Each month they have a wee freebie something on their front cover and I couldn't resist making this scarf with the freebie giant wooden button!  Such a simple stitch too to create those ridges!  It almost looks knitted! 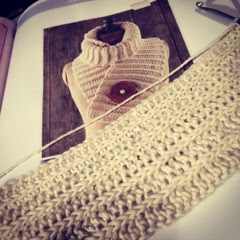 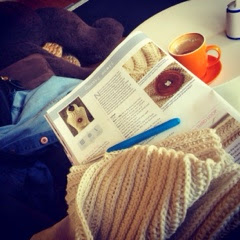 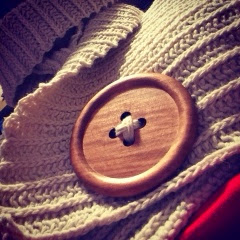 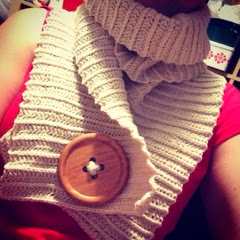 Given the distinct chill in the air I am feeling at the moment, I don't think it's going to be too long before I can gallivant about in it!

Posted by LionessLady at 3:37 PM 2 comments: 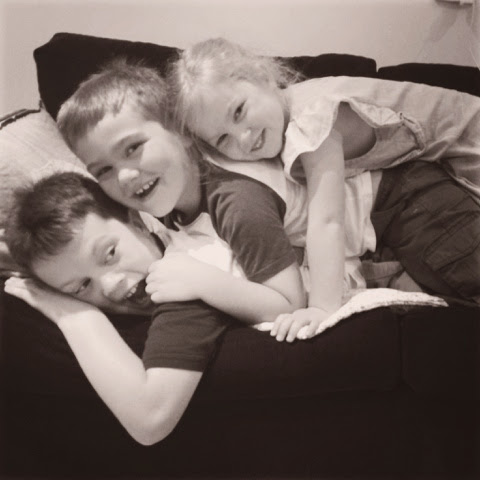 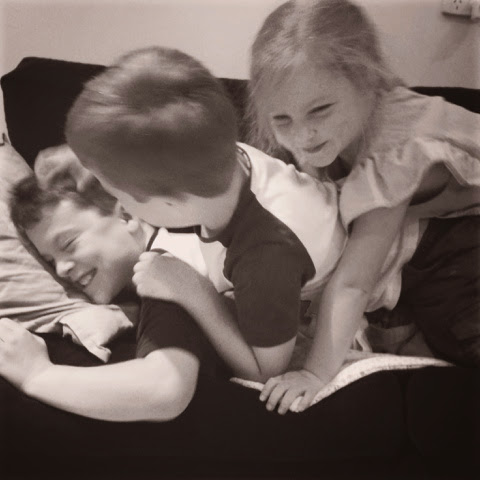 Oscar, Isaac and Matilda - My three loves getting their own sibling love on, even if it does only last five minutes!
﻿
Posted by LionessLady at 8:18 AM 2 comments: 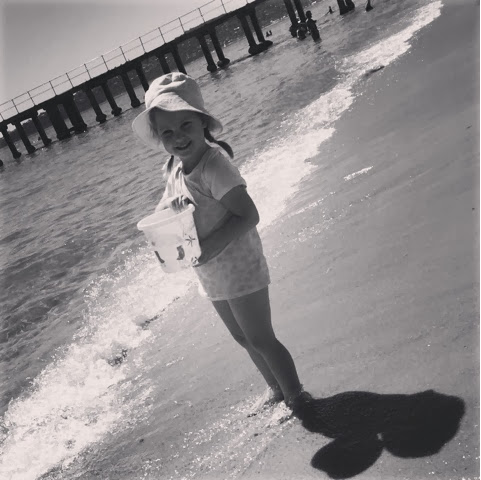 Matilda - who doesn't love some sandcastle making at the beach. 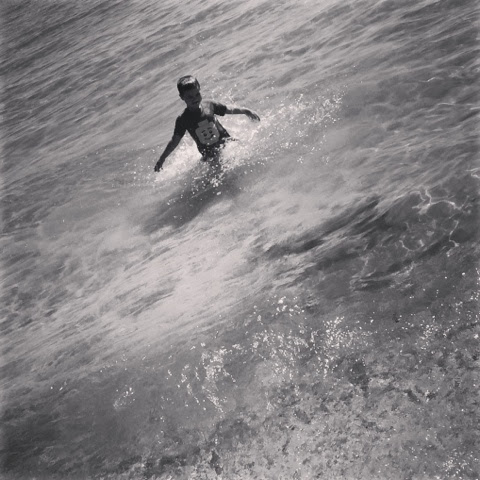 Isaac - running away from seaweed and jellyfish! 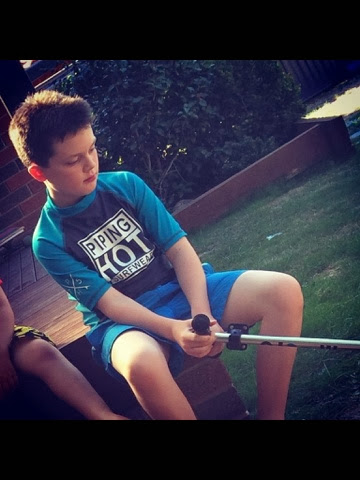 Oscar - having a think, I think.

Joining in with Jodi.

In January I signed up for Michelle Bridges 12wbt.  While I know there is nothing more boring than reading about someone's new exercise regime or wacky diet I must confess I have been loving this one!  I love her food plans!  I love her exercise plans!  I love her no nonsense, straight to the point video messages!  I love that queer little accent she appears to have!  The woman has constant Pep!  And of course, she now has Commando!!!!!

I have been whacking her weekly menus up on the fridge and pretty religiously following them.  She includes a shopping list each week too which makes it pretty simple.  I have been mixing up her exercise sessions along with my own running and my weekly visit to a personal trainer.  (I've entered in to the Run for the Kids in April which is 15km, hence the running, running and more running!)  I may also have stopped drinking alcohol... and that was a real killer!

One of my favourite breakfast or daytime snacky treats has been this homemade granola.  It's a bit of a mixture between a paleo recipe my sister sent me and a Sarah Wilson IGS one.  It is super simple, yummy and very moreish so don't over eat it! 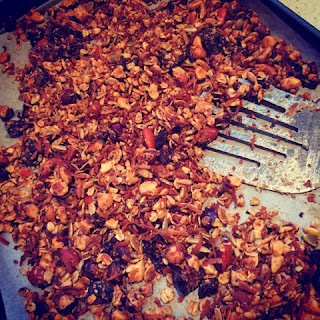 Whack 2 cups of nuts (almonds, cashews, pecans, walnuts, pepitas) in a food processor with a tablespoon of  ground cinnamon, a teaspoon each of ground nutmeg and all spice and a quarter of a teaspoon of ground cloves and ground ginger.  Cut up about 8 to 10 pitted dates and pop those in too.  Give it a big whizz until its all chopped up to your satisfaction.  Pour that nutty mix into a big bowl with 2 cups of flaked coconut and 2 cups of rolled oats.  Melt about a third of cup of coconut oil in your microwave and then mix a dollop or two of proper maple syrup into that.  Poor the runny stuff into your nutty stuff and mix it all together nicely. 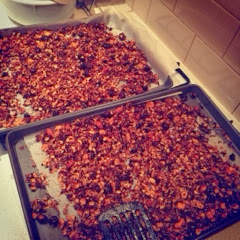 Spread it out nice and flat onto some oven trays and bake away on 180 for about 30-35 minutes.  You will need to hang around your oven turning the mixture every now and then as it cooks from the outside in so use a lovely big spatula to turn it all over, reflatten and spread it out and cook some more. 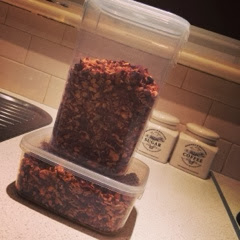 When you're happy with it's golden appearance leave it on your trays to cool.  Try small pinches of it as you potter around your kitchen cleaning up because apparently you are the only one who knows how to clear plates and load the dishwasher!  When cool, pour into some containers and store it in the freezer.  It keeps nice and fresh in there and lasts for ages - although mine disappears within a week or two!  You can eat it straight from the freezer without a problem.  I normally have a dollop of yoghurt on it with some berries mixed in.  Or I take a small little snack tub of it to work to tide me over to lunchtime.

Hope you found it as yummy as I do!

Posted by LionessLady at 9:45 PM 4 comments: 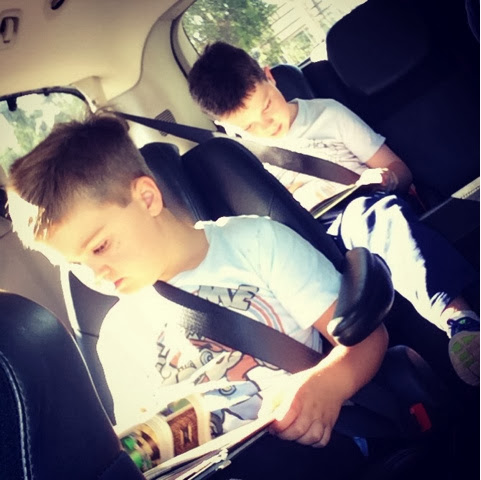 Oscar and Isaac - fully immersed in Minecraft cheater books!!! (And off for a boys weekend in Tassie to watch daddy race his speedboat so a quick snap on the iphone before either of them realised!) 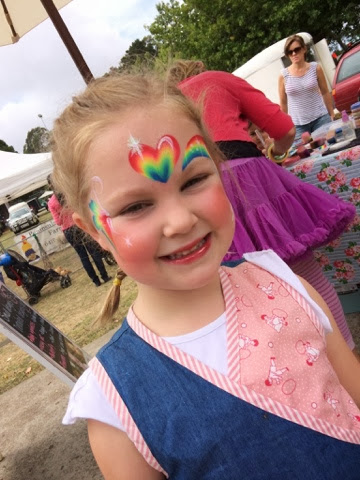 Matilda - cannot go past some rainbow face painting at the Red Hill Market with mummy on our girls only weekend!

Posted by LionessLady at 9:36 PM No comments:

Who doesn't love a good sniff around the Purl Bee blog!?  It's always full of crafty tutorials and inspiration!
I've been attracted to the pattern they shared on crochet placemats and thought they would be perfect for my friends upcoming birthday.﻿ 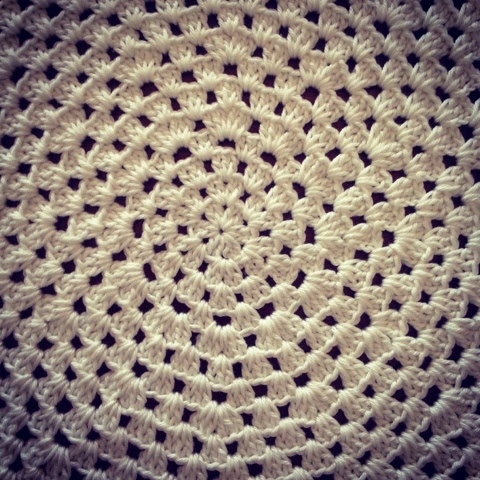 To give you an idea of size I've included my lovely Rob Ryan plates in each image!﻿ 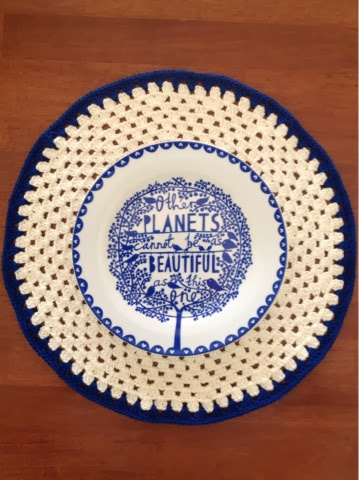 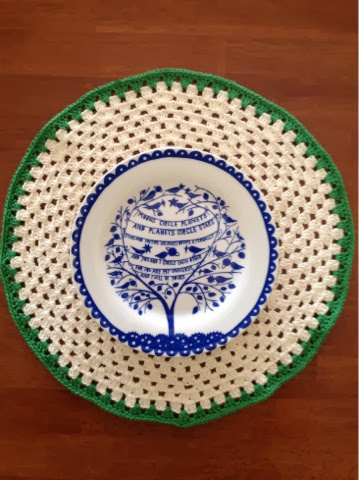 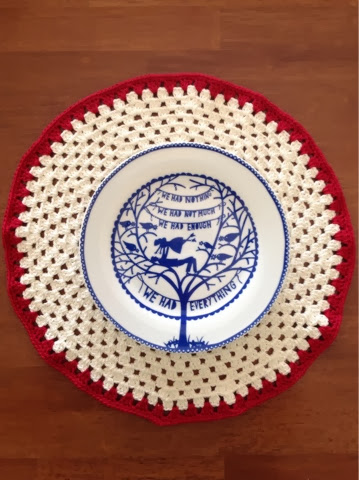 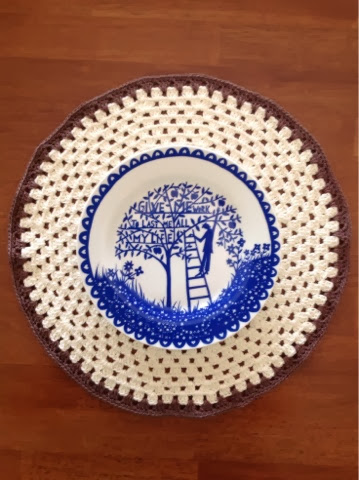 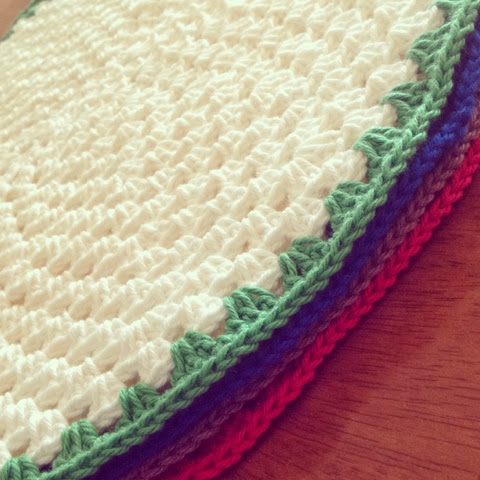 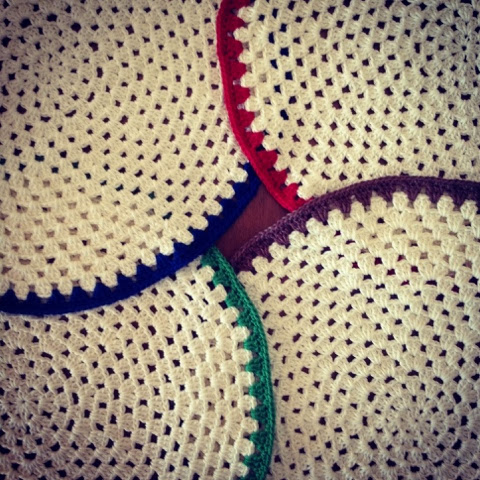 I've used a cotton blend for mine so they should be easy to wash and care for.  They were simple to whip up as well and when I shared them on instagram someone said that the pattern they created looked a little like a magic eye image!  I'll definitely make these again but in future I might stick with one colour for the border.  While the bright colours I've used here look great individually, I'm not sure they work well together, and I really like the subtle look of the yellows used in the original pattern. Hope my friend still likes them!!!

Pin·board (pĭn·bôrd): n. a visual collection of things you love 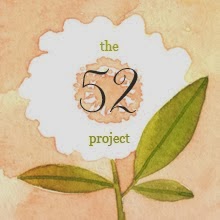 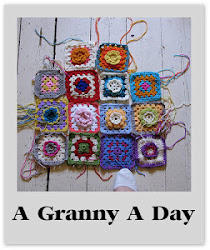 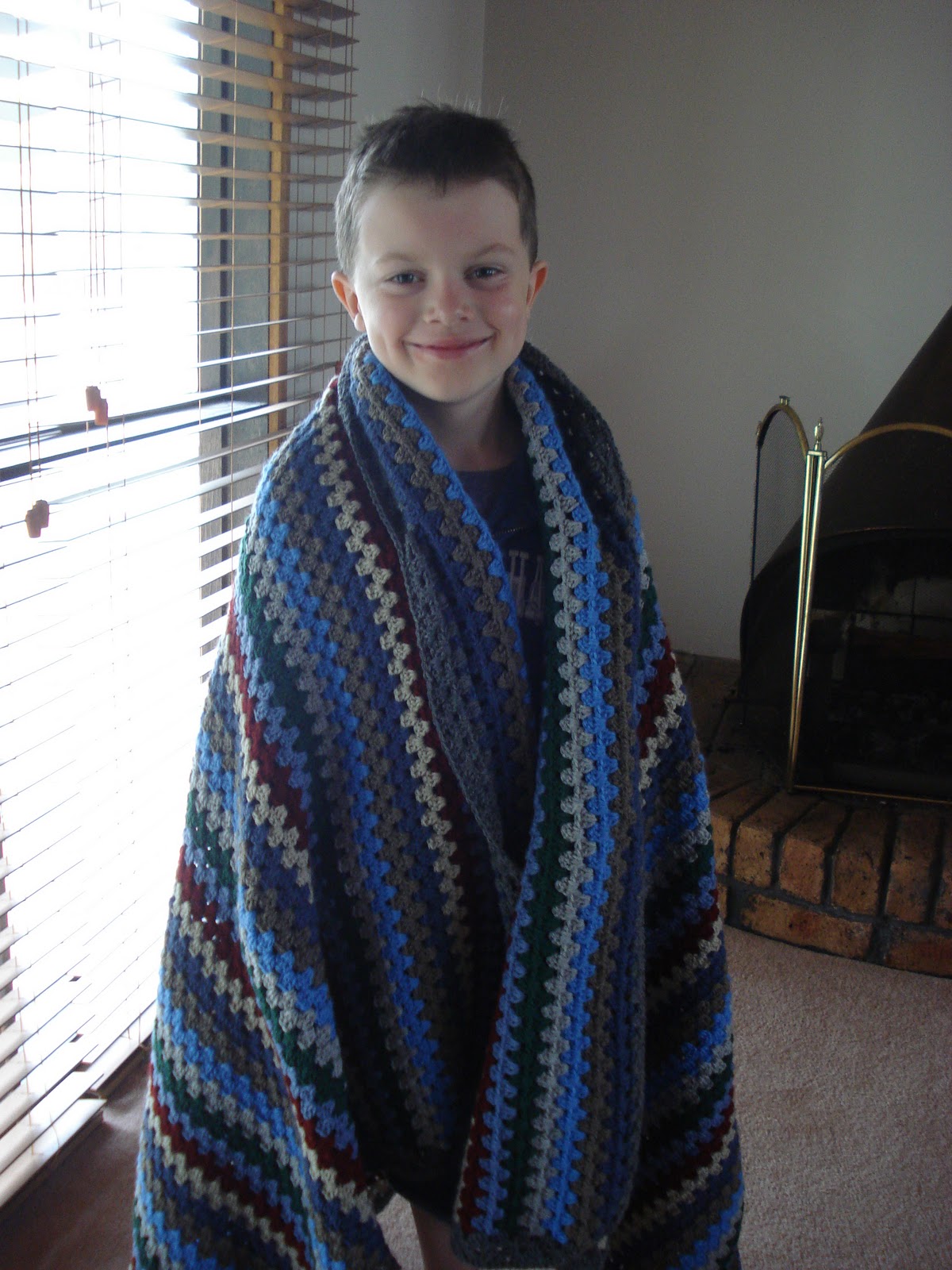 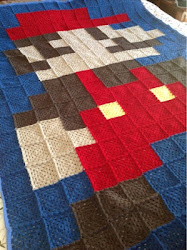 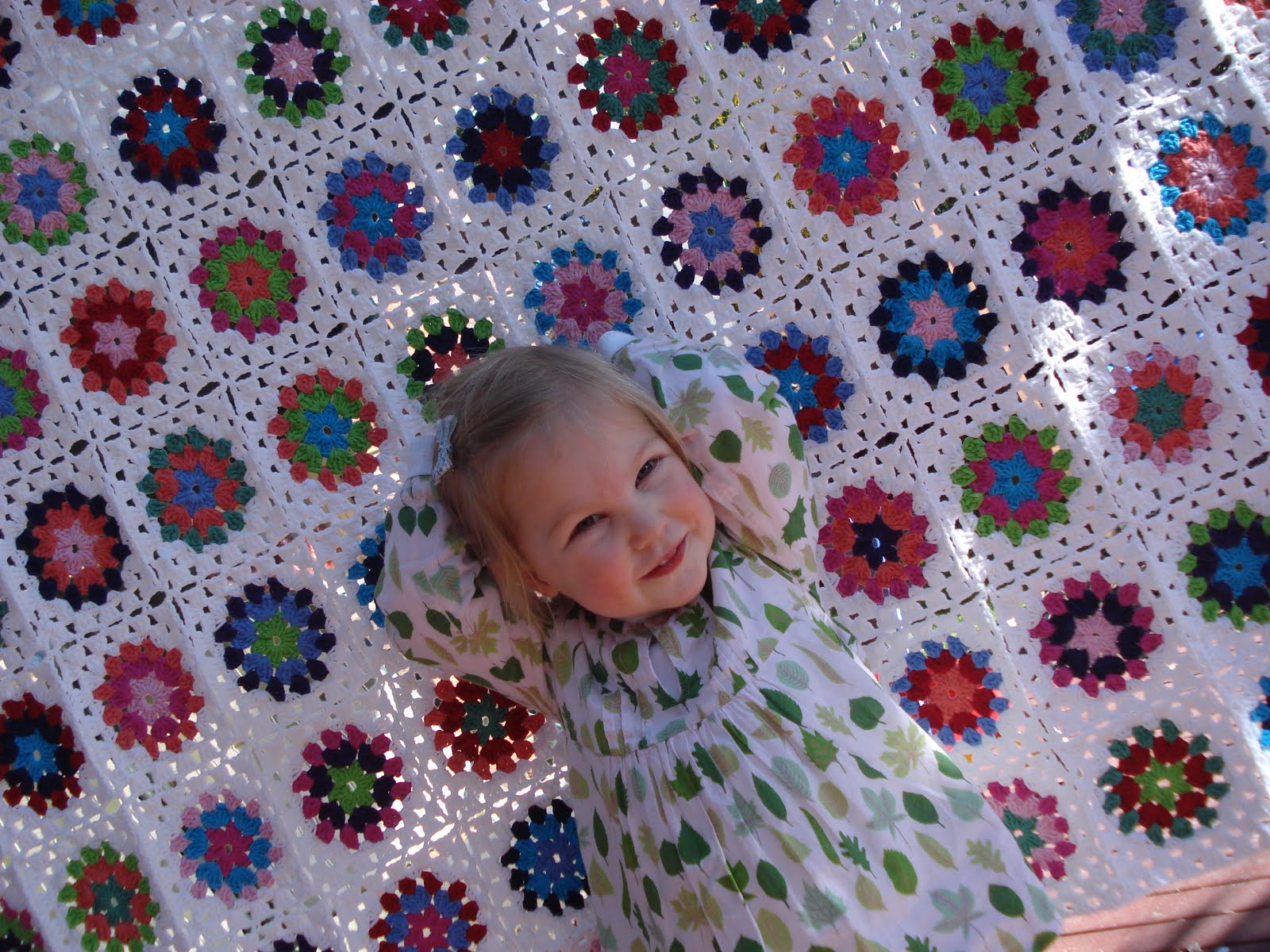